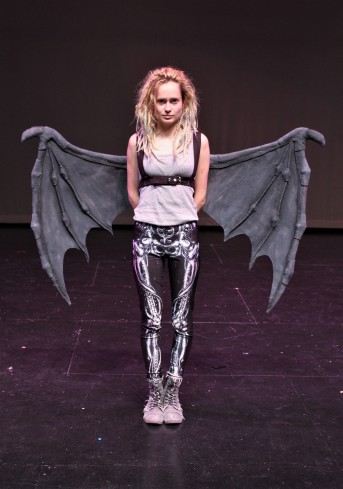 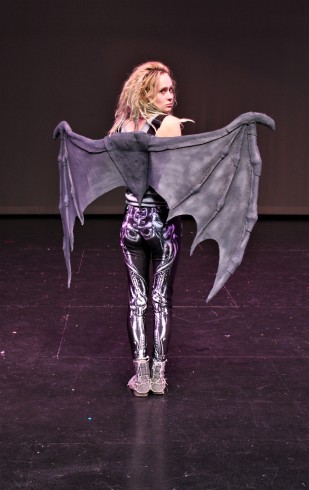 They’re about as wide as I am tall. (I’m 5’3″) The wings were a final project for my costume craft class my senior year at Binghamton University during Spring of ’17. The class was taught by Andrea Lenci-Cerchiara and assisted by the ladies at the costume shop, Sandy Vest and Marisa Wade. I will forever be grateful to them for being both my teachers and then coworkers.
Now on to the process!… 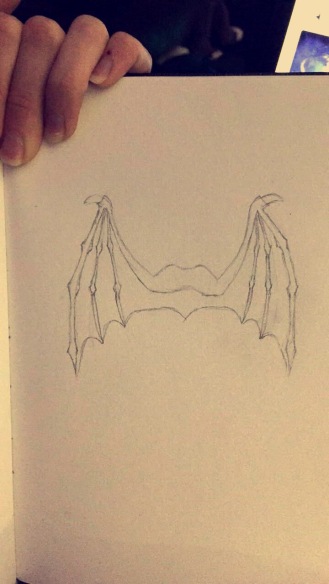 Of course, as with most projects, it starts with research. I made a pinterest as my teacher suggested and pinned a bunch of wing images to my Gargoyle Wings board. I looked through them with an idea in my head of what I wanted and picked out the ones that fit best.

After that I sketched. I made an outline of how I wanted the wings to look with the shape of them, where the joints and “claws” would go, and how the harness would look.

Then the real work began. I started with enlarging the sketched image to a piece of pattern making paper and drawing the outline to the actual size I wanted the wings to be. I only drew one side since there’s really no need to do both. After cutting the shape out I took out the roll of wire and started shaping it around the top of the wing.
The wire I used was aluminum armature wire which is used for sculpting as it is strong and flexible but pliable and soft enough to be easily cut and molded. I got a 20 foot roll of 1/8″ diameter wire and still had some left over.

Then I took the backer rod (gray tubing) and cut it to the size of the wire. I was originally going to try to just slip the wire in but I quickly realized that with the size of the project and the flexibility of the materials it would be impossible to get it to stay in the middle. So to fix that problem, my teacher suggested I cut open the rod halfway, wrap it around the wire, and then glue it back together.
So I did that, but since the glue took a while to dry and I didn’t want to waste time standing there holding it together and waiting, I needed a way to hold it together while I kept working…that’s when the safety pins came in.
I was working on the wings in the theatre department’s costume shop which is endlessly abundant in safety pins, so I utilized as many as needed to hold the rod while it dried.
Backer rod is a soft spongy material that is typically used to plug up household gaps. 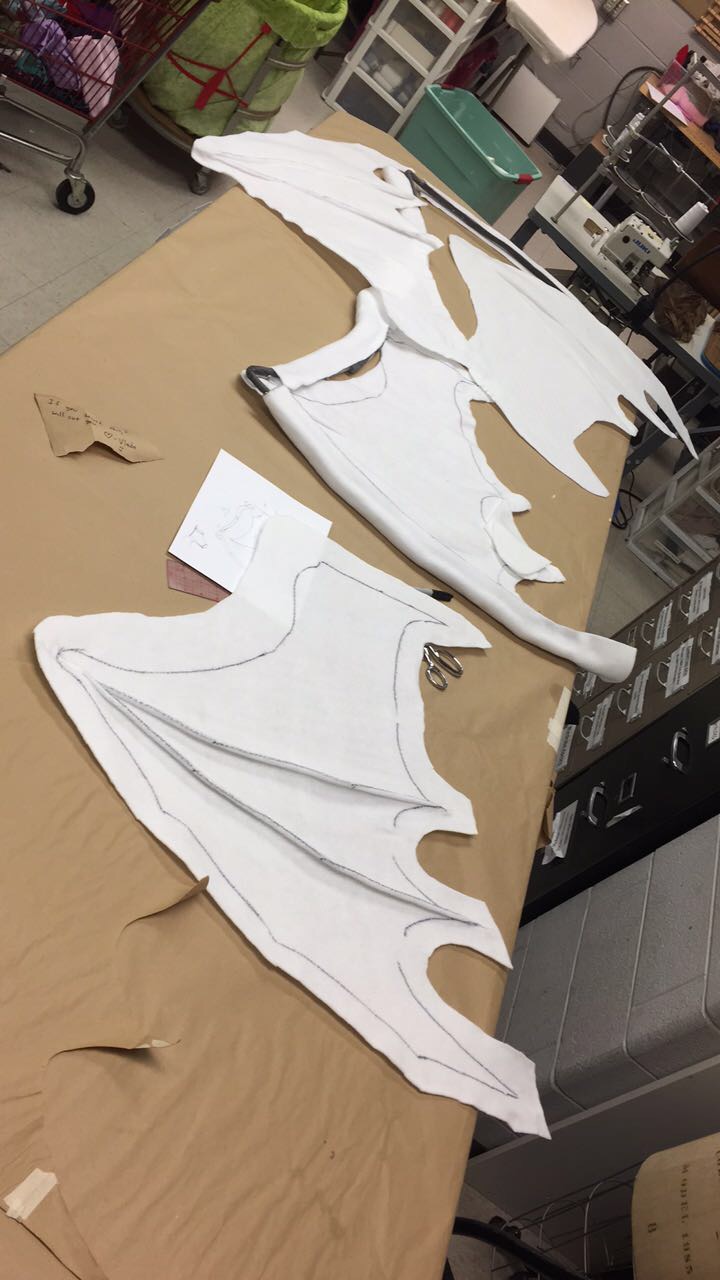 Then, I took a material called fosshape, cut out the wing pieces, and steamed it.
Fosshape is a felt like material that you can mold to the shape you want and after steaming it, it shrinks and hardens. There are different thicknesses of fosshape for different projects. The problem with fosshape is that it’s easy to miscalculate how much you need so prior to cutting all of these out, I made a test wing to see how big I had to actually cut the pieces.

You can see the outline of the “bones” in the middle of the wing. Something I probably should have done but didn’t was put wire in there as well. Those bones are just sewn and steamed into that shape. They are not backed up by anything. (That ended up making the wings a bit too flexible)

After cutting out the 4 pieces, 2 left wings and 2 right, I carefully steamed them slowly and evenly so that one side didn’t shrink more than the other and cause weird buckles. Once you steam it you can’t go back! You have to do it right the first time or start over! That’s what I meant when I said it’s easy to miscalculate. You HAVE TO give yourself an extra few inches to allow for shrinkage and you have to do it evenly.

I then started to fit the pieces together. The top wire that I just shaped and thickened with the backer rod got another piece of fosshape for extra thickness and as a means of combining the wire with the actual wings. I steamed those into shape as well. 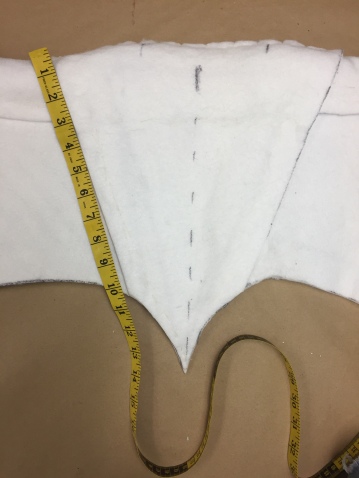 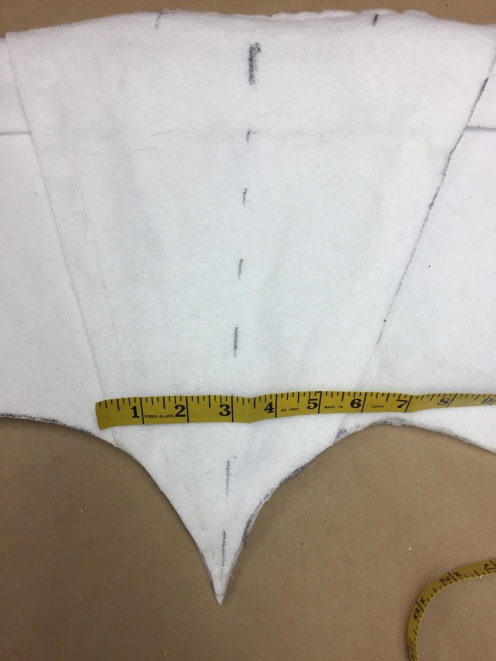 Afterwards the pieces were sewn together with a strong thread everywhere except the bottom and I added a middle triangular piece to hold it all together, even out the shape, and give extra support. The top ends of the triangles were sewn together curving around the wire. Once all the pieces were together, I assessed the shape and cut out any uneven edges left from steaming. Here, I measure the center piece to get an idea of how much fabric I need to make the harness. 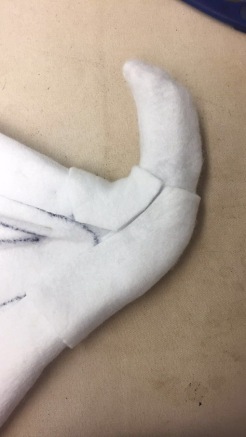 Next up are the claws. I glued two small pieces of backer rod together for the general shape and cut out two claw shaped pieces of fosshape and sewed them together. I put the backer rod into the fosshape and steamed it. After I steamed to satisfaction, I placed the claw on the open edge of the top of the wing and glued the backer rod claw to the backer rod wire. Then I shaped the rest of the material and steamed it into place. To finish it off I cut another piece of fosshape to close up the edges, neaten them up, and make it appear as though the claw was growing out of the wing rather than just being attached to it. I sewed that on.

Then come the joints. I cut out small rectangular pieces of fosshape. 2 for each bone, so 4 for each side of the 2 wings, so 8 for each side, so 16 in total. I used masking tape to get a rough shape of the joint, then placed the fosshape pieces over it and steamed them. Then I cut off any uneven or excess edges and sewed them into place. 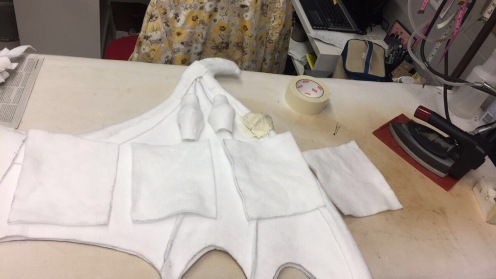 So those were the small joints but there were also large joints for the wired outer bones. Once again, I cut out rectangular pieces, much larger this time, and went through the same process as with the small ones. There were 3 for each side, so 6 in total. 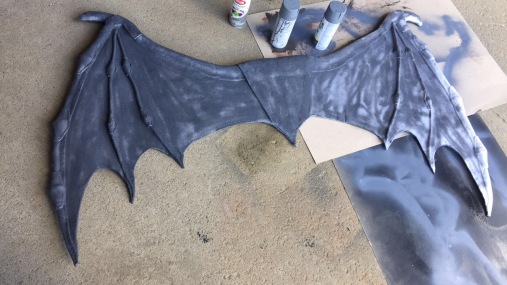 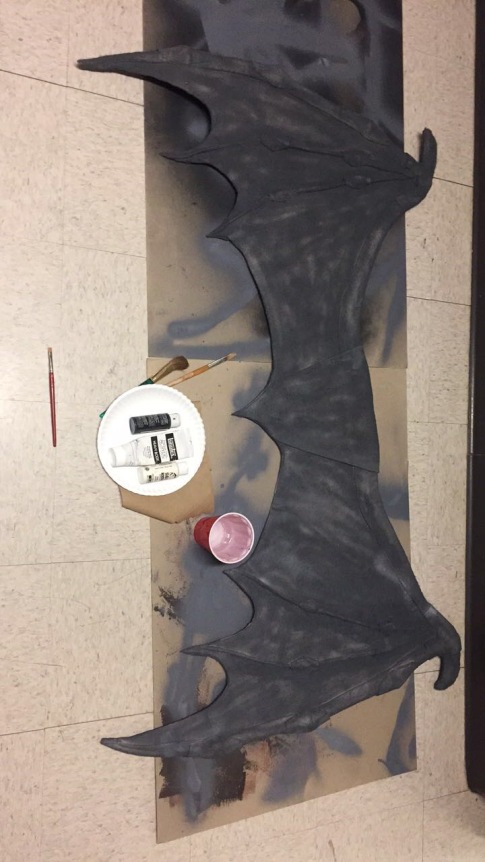 Then I placed another piece of wire in between the inner and outer wings and sewed the bottom shut.

Time to paint!
I took the wings, some large sheets, and gray spray paint outside and started spraying. I ended up using around 3-4 cans I believe. Afterwards, I did some extra shading by the bones and on the joints with a thick fluffy brush and a darker shade of gray that I mixed with acrylic paint. 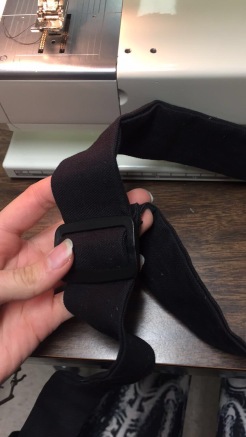 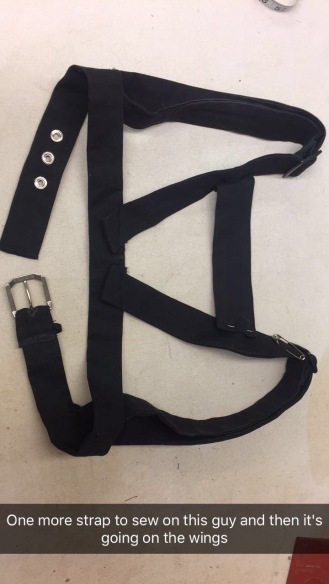 And finally, the last thing I had to do was make the harness to be able to actually wear the wings. I used a sturdy canvas like material and cut a few long pieces for the straps. For this I had to measure my underbust, over the shoulder from mid back under my shoulder blades to the front where it would end, the length of the back support strap, and the width of the straps so that they were comfortable and wide enough to hold the wings.

Each piece was cut slightly longer for seam allowance and/or belt assembly. After sewing all the straps together, I attached the belt buckle and poked 3 grommet holes to allow for some adjustment.

At the end of all that, I sewed the harness on to the wings and I was done! Then I put them on and paraded around the Fine Arts Building with two other classmates that finished at the same time.

If you liked this Behind The Scenes process, you can be sure there’s more to come! 🤩

If you want to see more of my art you can check out my portfolio at consciouscreations.eu 🦄